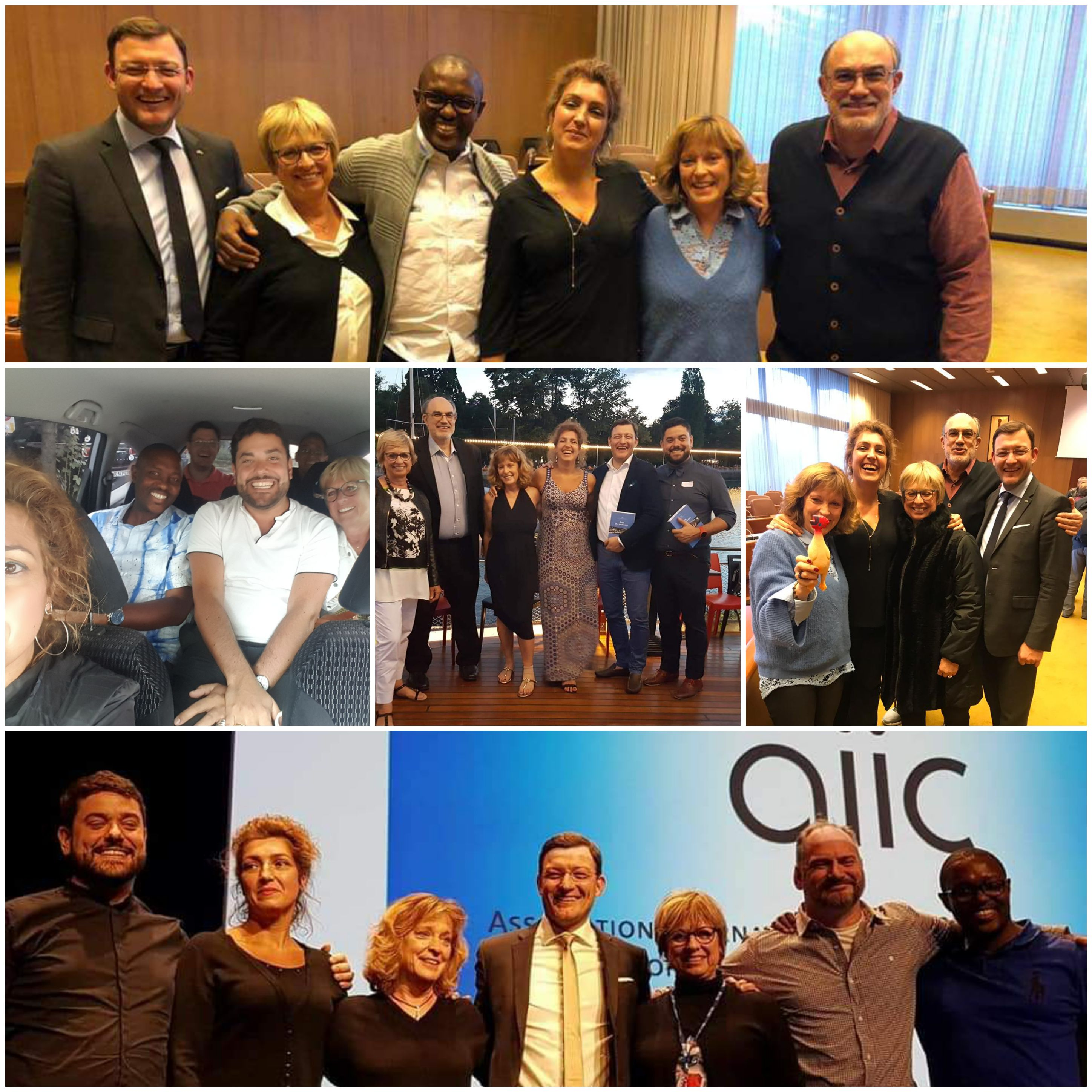 Uroš was born in a multilingual and multicultural country that no longer exists - Yugoslavia - attended French, American, Austrian and Slovenian schools and lived in Poland, Austria, the United States and now Slovenia

Uroš has moved house 15 times in his life and vows the last move was really the last!

Uroš wanted to become a pilot and could draw an entire Boeing 747 cockpit instrument panel from memory at age 15 but then got glasses and that was the end of that.

Uroš is also a certified sommelier, owns a vineyard and is trying (keyword trying!) his hand at making his own sparkling wine for a very special occasion.

Uroš has been a die-hard freelancer for the entirety of his almost 25-year career and joined AIIC after realizing that our working conditions and standards were not a gift from above but the fruit of decades of hard work by our delegations and governing bodies.

Micky was born in Montreal but brought up in Europe, England and Italy mainly before moving to Switzerland, Luxembourg and finally back to Italy.

Micky is a keen swimmer, skier, horse rider, roller skater, fencer and kayaker but also enjoys curling up in an armchair to read, knit or sew.

Micky is a dog lover and spends much of her time tending to her big white sheepdog.

Micky is definitely a water person and to chill, sun, sea and sand are a must.

Micky became an AIIC member as a very young interpreter and has served as elected officer in 3 different AIIC regions. AIIC has been a constant in Micky’s life.

Emmanuel was born in Cameroon, a multicultural country where English and French are official languages. Sadly, its language and cultural diversity has bred a raging and deadly conflict. He has lived and worked in Tanzania and Côte d’Ivoire.

Emmanuel aged seven already wanted to be a translator and interpreter, after seeing a family friend on a picture interpreting at a presidential tête-à-tête in the headline of the national daily.

Emmanuel’s experience in AIIC has been an ongoing learning process in his various roles at the CdP, AB and now the very exciting ExCo. AIIC has heightened his sense of justice, transparency and compassion.

Lara was born in Mozambique and grew up in a small village in the mountains of Eswatini called Mhlambanyatsi.

Lara went to Waterford Kamhlaba, the United World College of Southern Africa, a multi-racial school founded in opposition to South Africa's apartheid policies, to which she credits her kaleidoscopic view of the world.

Lara was an academic for over 20 years, most recently at the Catholic University of Lisbon, where she was the Coordinator of the Applied Foreign Languages degree programme.

Jenny was born in Yorkshire and claims her most formative life experience was going as an au pair to Rome when she was 18, making her the Mediterraneanised Yorkshirewoman she is today- Northern pragmatism with a zest for life.

Jenny always intended to become a doctor, until she suddenly changed her mind and became an interpreter.

Jenny is the author of the Norman Wisdom ‘gaffe’ that has gone down in the annals of interpreting history.

Jenny joined AIIC as a staff interpreter in 1991 and has lived in 5 AIIC regions.

Paco was born in Germany and was a baby interpreter to his immigrant parents. All those sight translations, bilaterals and consecs without notes did not count towards his AIIC candidature though.

Paco loves the beach. So much so, that he participated in his first remote ExCo meeting sitting in the shade of a palm tree.

Paco loves cooking too, but more so he loves the results, good food! Eating it and sharing it with friends and family.

Paco joined AIIC at the beginning of his career, but left when he became a staffer in Brussels! But he repented, saw the light and humbly came back into the fold.

Paco left the European Commission to spend 2 years in New York. It's been 10 years... and counting.

Youssef (Jose) was born in Lisbon, Portugal, and brought up in Egypt, Spain and Portugal.

Youssef could speak and read seven languages by the age of ten.

Youssef's main hobby is reading. He is definitely a desert person but the sea and the mountains also inspire him.

Youssef is an engineer by training and an interpreter out of passion. His two careers have run in parallel since 1983.

Youssef became an AIIC member to help in organising the interpretation market.

By continuing to use this website, you consent to our use of Essential Cookies. Learn more...
You can always change your privacy settings, which you will find at the bottom of every page.
.
We'd like to set Google Analytics to help us improve our website. Please check to allow, or un-check to disallow.